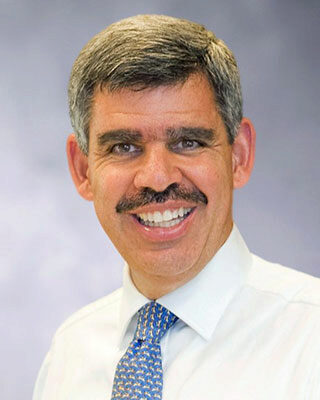 Mohamed A. El-Erian is a Senior Global Fellow at the Joseph H. Lauder Institute of Management & International Studies and part-time professor of practice at the Wharton School of the University of Pennsylvania. As part of the Senior Global Fellows Program at the Lauder Institute, El-Erian will leverage his distinguished experience in global affairs, policy, and business to contribute to the curriculum and serve as a mentor to the student community.

A widely followed leader in economics and finance, El-Erian is chief economic adviser at Allianz, senior advisor at Gramercy, and the incoming president of Queens’ College at the University of Cambridge effective fall 2020. El-Erian’s previous appointments include chairman of President Barack Obama’s Global Development Council, CEO of the Harvard Management Company, deputy director of the International Monetary Fund, and CEO/co-CIO of PIMCO.

In addition to being a contributing editor at the Financial Times, columnist for Bloomberg Opinion, and author of two New York Times best sellers, El-Erian was named four years in a row to Foreign Policy’s list of “Top 100 Global Thinkers.” He is credited with identifying and coining the concept of the “New Normal” in 2009 to describe the likely sluggish economic performance of advanced economies after the 2008 global financial crisis, and for pointing out in 2016 the limitations to protracted and sole reliance on central bank policies.