Family Businessman Taps into Wharton Programs to Fuel His Success

The entrepreneurial spirit came early for Randy Breitman. As a six-year-old boy, he and his brother counted quarters for the family’s coin-operated laundry business.

“My father and both my grandfathers ingrained in me the basics of running a business,” says Breitman. In 2001, he took over management of SEBCO Laundry Systems, the 40-year-old company started by his father, and SEB Realty, his family’s thriving real estate firm focused on the apartment and commercial building sectors.

Now, the 37-year-old entrepreneur is seeking to bring into the internet age his family’s East Coast network of apartment building washer and dryer machines. Tenants soon will use their smart phones to wash their clothes, and the company will be able to proactively monitor the machines via computers, even providing analytics to manufacturers.  Breitman is tapping into the next wave of technology innovation known as the “internet of things,” where one day all devices will be connected. 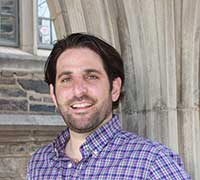 “When you lock yourself in a room with people for a week and just focus on one topic and can tap into faculty who have decades of experience, the learning is powerful.”

One indication of the family’s success is last year’s opening of a “Google-inspired” corporate headquarters in a 250,000 square-foot industrial park in northern New Jersey. In the midst of all this growth, Breitman wanted to strengthen his own business skills. He found his answer at Wharton, where he recently participated in Executive Negotiation Workshop: Bargaining for Advantage® and Mergers and Acquisitions.

“When you lock yourself in a room with people for a week and just focus on one topic and can tap into faculty who have decades of experience, the learning is powerful — amazing,“ says Breitman, who considers Wharton’s intensive programs “one of the best ways to rapidly acquire knowledge.”

Wharton’s Executive Negotiation Workshop  has proven particularly relevant to his role. “I’m constantly negotiating every day in all the things I do — whether I am negotiating with vendors, employees, municipalities, competitors. When I negotiate now, I have a toolbox — there’s a structured way to look at every negotiation,” Breitman says, adding, “The critical thing I learned was that finding the win-win in a negotiation is absolutely the way to go,” he adds. “If you have that in mind when you go into a negotiation, you’re going to be successful.”

He’s so sold on the negotiation program, taught by G. Richard Shell, Professor of Legal Studies and Business Ethics and Management, that Breitman confesses, “I would pay to take the course again.  Prof. Shell actually made it fun and tough — it’s very hard to put both of those together but he succeeded 100 percent.”

Mergers and Acquisitions was also eye opening for Breitman, noting that his family’s entrepreneurial background meant that deal making was done most often “on the back of an envelope” rather than using spreadsheets and in-depth analysis. “The M&A program was an opportunity for me to see the way the Fortune 500 companies do mergers.” His classmates included the head of M&A for oil and gas information solutions company Schlumberger, The Boeing Company, and eBay.

“These are the best people in their fields. Being in the same room with them creates an amazing environment because everybody brings 100 percent — it just makes you better,” he says. Breitman discovered that no two M&A deals are alike, and that acquisitions follow a structured process with very clearly defined steps.

“It’s important to be able to see that — to lay out that structure in advance and to know what all the steps are along the way,“ he says. “I’m more methodical in how I approach M&A. I’m able now to have more irons in the fire because I know where I stand in the process. The risk of not knowing where you are is you’re really not in the game — you’re flying blind.”

Breitman is already applying concepts of both courses as he takes his family’s businesses into the future. “I’m excited about the internet of things. That’s the future — that’s where we’ll be in the next five or ten years. When a machine breaks down, we won’t need anyone to call us; we’ll know.  Every light bulb, every refrigerator, heater, air conditioner, car — every device that exists — is going to be connected.”