The Latest Thought Leadership for the COVID-19 Era

If the pandemic has afforded you time for professional development, what has been your primary source?

The pandemic is making leaders in every industry acutely aware of the skills they need to strengthen. What one skill, if improved, would enhance your leadership today?

What is your biggest personal business challenge today?

Before the next crisis, our business needs to proactively rethink our:

What is the biggest roadblock you encounter when trying to persuade others?

When you transitioned into a management role, what kind of training did you receive?

When I am charged with getting others to work on an initiative, I rely on:

Which area, if strengthened, would most enhance your effectiveness in your current position?

How well does your organization see sooner and act faster?

What one change would make the greatest difference in your time management?

How does your organization develop its high potentials?

How would you rate your ability to coach your direct reports and others in your organization?

What is your organization’s most important growth strategy?

When you need new ideas — whether for an innovative new product or service, a better way to engage your team, or something in between — where do you turn for inspiration?

Which choice best describes your experience with executive coaching? 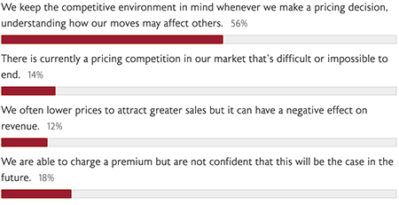 How qualified are you to assess your investment advisor’s performance?

One of my professional goals for 2019 is to:

What change would make the most positive difference in your leadership in 2019?

My typical approach to office politics is:

How is your organization preparing for potential catastrophic risks?

How have you handled job-related burnout?

If you are not in a finance role, how would you describe your knowledge of finance and accounting?

How do you rate your persuasion skills?

How would you best describe your organization’s presence on social media?

How would you describe your organization’s strategy?

When dealing with difficult people, I most often:

How do you support new leaders in your organization?

My negotiation outcomes would most likely improve if I:

Throughout your career which factor has been most essential to your success?

My approach to goal-setting is best described as:

I’m at my most productive when I:

My greatest leadership challenge is:

When it comes to workplace conflicts, I typically:

I could improve my handling of organizational politics by:

As a team leader, I most often:

How well does your organization execute its strategic initiatives?

When I’m confronted by a belief or behavior I believe I should change, I typically:

My ability to influence others:

Innovation efforts in my organization are best described as:

What retention strategy is most important for retaining your top talent?

Performance appraisals at my organization are:

I manage the demands of my job by:

What is your organization’s onboarding process?

How is your business responding to digital transformations?

The biggest impediment to strategy execution in my organization is:

If you have led or been part of a diverse team, how would you describe your experience?

To what extent is your organization responding to the aging global population?

My organization’s marketing strategy is best described as:

Does your organization encourage employees to share innovative ideas?

I would describe my ability to navigate organizational politics as:

What is your organization’s stance on failure?

In what area of business acumen could you use more knowledge?

My organization’s competitive strategy is mainly:

My network can be best described as:

Customer Lifetime Value’s use in our organization can be described as:

How successful are you at integrating new insights to improve your team’s results?

Do you use a mindfulness practice, such as meditation?

Which metric should your organization track more closely?

Decision-making in my organization is best described as:

Which best describes your negotiating skills?

When you need new ideas — whether for an innovative new product or service, a better way to engage your team, or something in between — where do you turn for inspiration?

To be more productive, I believe I need to...

Does your organization encourage an enterprise mindset?

Are you taking advantage of executive education opportunities offered online?