Preparing NFL Athletes for Future Careers Off the Field

For Ramzee Robinson, 2007’s NFL Draft stretched into an agonizing two-day vigil in front of the TV with friends and family. It ended with the University of Alabama defensive standout chosen with the final (255th) selection, the slot that football pundits jokingly call “Mr. Irrelevant.” He said that only enflamed his already burning desire to succeed.

“Once my name was finally called as last pick to the Detroit Lions, I went in extremely motivated to display and prove my talent, prove my work ethic, and prove my ability to play the NFL game at a high level,” said Robinson. Over the next seven autumns, Robinson played for the Lions, the Philadelphia Eagles, and Cleveland Browns, with a stint in the Canadian Football League.

Now, with a strong assist from an innovative career development program, Robinson has channeled his new passion — building a second career in pro sports through the growing field of player engagement — into to what he calls his “dream job.” Robinson said the Kansas City Chiefs told him when they offered him the job as a player engagement coordinator that he probably would not have been hired if not for Wharton’s Athlete Development Professional Certification Program, which was created with input from the National Football League, on his resume. 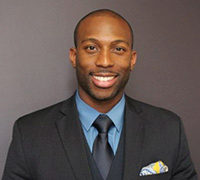 The Wharton certificate program recognizes the explosive growth within pro as well as college sports of player engagement — a front-office position that works closely with athletes to resolve off-the-field issues. Those issues can range from future career or education planning to personal crises or even helping when their car breaks down on the way to practice.

In 2011, Wharton Executive Education teamed up with the NFL and called on Professor Ken Shropshire, faculty director of the Wharton Sports Business Initiative, to develop an intensive program — tailored especially for former athletes — that would help attendees build new skills in crisis management, critical thinking, and leadership.

During an intensive four days, students take part in exercises aimed at boosting their negotiating skills and emotional intelligence, while working closely with Wharton professors such as Shropshire and other experts, including Mario Moussa, a nationally known consultant on strategy and persuasion.

Moussa, who aided Shropshire in drafting the curriculum, said the goal was to help attendees develop strategies to engage the array of stakeholders in the increasingly complex world of pro and college football, and to learn how to solve problems. “The program is designed to give them tools to learn, in business terms, what strategies to engage the players, the owner and the people around the owner, and the coaches,” he explained.

Robinson started focusing around 2011 — with his first child on the way and his playing days numbered — about how he might parlay his Alabama management degree into his second career. During a stint with the Denver Broncos, Robinson started networking in his local community and landed a job as a general manager at a staffing company, but he held onto the notion of somehow remaining in pro football.

When his playing career ended, Robinson attended an NFL career management program and started thinking about working in player engagement. “I know for a fact that I don’t want to be a coach, I know that scouting isn’t a desire of mine — but I want to coach these guys off the field,” he remembered thinking. “What does that look like?”

He researched graduate programs in sports management, but then a contact with the Players Trust, the league’s arm for retired players, suggested the Wharton program. The January 2016 session in Philadelphia was different than what Robinson expected, which was hours of listening to professors in classrooms. Instead, it involved intensive testing on emotional intelligence and considerable time negotiating with and persuading his classmates. “It really stretched me and got me outside of my comfort zone,” he said.

Robinson continues to think about his future — hoping to someday work on league-wide player engagement with the NFL front office — but for now he enjoys coming to work every day. “I’m a former pro athlete working with pro athletes,” he said, his voice brimming with enthusiasm.