Home › Wharton@Work › Rising to the Challenge: Leading and Competing in a Dynamic Market

Rising to the Challenge: Leading and Competing in a Dynamic Market

It’s not every day that an executive gets a blank slate on which to build a company. But, that’s what happened to Alden Kitson in 2015, when he became managing director of Cuestamoras Energia, one of three diversified businesses established by a century-old family-owned business in Costa Rica.

“How often in your career do you get to develop an entirely new company and write the rules?” Kitson says of his role leading Cuestamoras’ energy division that he operates from his base in Guatemala.

His 25-year energy career first brought him to war-torn El Salvador in the late 1980s as part of a USAID project with the National Rural Electric Cooperative Association. He has since worked in both the private and public sector throughout Central and South America, focusing on energy distribution, generation, and commercialization.  His current role represents his second time at the helm of an energy startup, an opportunity that led him on the path to Wharton to enhance his business and leadership skills. 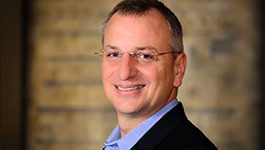 “As a senior manager and a team leader, my work is much more that of facilitator and motivator. Focusing on how to get people in each country to come together and stay focused and motivated even though we often don’t have face-to-face contact is a challenge.”

“When I began building out the company, I quickly realized that the market dynamics I was familiar with over the last 10 years had changed and we needed to reevaluate how we were going to grow the business,” recalls Kitson. Oil prices were plummeting to half their previous cost, and suddenly energy had become a commodity, resulting in more competition and leaner margins.

“I attended Wharton’s Creating and Implementing Strategy for Competitive Advantage program in December 2016 after I began to see a change in the dynamics of the energy market in the region; we needed to rethink our day-to-day business strategy,” Kitson says, explaining that the program gave him a framework to engage his team in developing a market strategy for how they would compete over the next three to five years.

Based on Kitson’s recommendation, two of his Cuestamoras colleagues attended the Wharton strategy program, and the team is now implementing the competitive advantage methodology in all three of Cuestamoras’ businesses — energy, health/pharma, and urban development.

“We found that our overall strategy is sound, but we needed to rethink how we compete. [In the case of the energy business], we are providing a lot of services as value-added services and we need to take them to the next level and make them revenue-producing activities,” he explains.

Kitson observes that most wholesale consumers are not knowledgeable about power — where it comes from, how to procure it efficiently, and how to manage their consumption to become more competitive. Central America and Mexico are experiencing the same global growth of renewable energy seen by the U.S. and other markets. Kitson envisions his role as educating customers and giving them creative options as they seek greater control over their energy choices, including helping them locally procure their energy.

He and other leaders are now engaged in a new strategic alignment process over the next six to nine months, which presented another challenge — the need to establish a leadership team that could help them achieve their long-term competitive strategy.

“We’ve doubled in size in the last 12 months and will double in size again in the next 12 months.  We are bringing in a lot of new people across multiple countries in Central America. We need to provide a clear vision of where we’re going and provide opportunities to empower people,” says Kitson.

In October 2017, Kitson returned to Wharton for a second program, Global Strategic Leadership, which helped him enhance his leadership skills while exposing him to a wider group of professionals facing similar challenges.

“As a senior manager and a team leader, my work is much more that of facilitator and motivator than somebody doing all the number crunching,” says Kitson. “Focusing on how to get people in each country to come together and stay focused and motivated even though we often don’t have face-to-face contact is a challenge.”

According to Kitson, the Wharton program helped him navigate the cross-cultural and international dynamics of his team based in multiple countries from Costa Rica to Guatemala to El Salvador, and soon, Mexico.

He adds that he’s looking forward to returning to Wharton to tackle his next management challenge — executing strategy, and along the way, intends to complete Wharton’s Certificate of Professional Development.