Thinking Outside the Box at the National Academy of Medicine

The first time Kimber Bogard, PhD, stepped onto Wharton’s Philadelphia campus, she was leading a three-year global activity that looked at how nine countries invested in their children’s development.

“I went to Wharton’s Global Strategic Leadership program to get a handle on how to run a global initiative. I had never run an initiative of this scale before and I really wanted to learn from other leaders and Wharton’s professors,” recalls Bogard, a New York City-based developmental psychologist serving as a senior officer at the National Academy of Medicine (NAM). 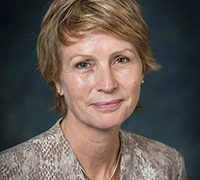 “Wharton’s program … would benefit anybody sitting at the intersection of executive leadership and taking forward their organization’s strategy.”

Wharton far exceeded Bogard’s expectations, sparking a breakthrough in her view of her organization’s role and capabilities. “I was surrounded by really smart leaders from many different types of organizations who inspired me to embrace a whole different level of thinking at the organizational level.”

Bogard explains that while the National Academies convene expert committees to put out consensus reports that address difficult questions in the areas of health and medicine, the committees disband once the science and recommendations are released.

“I thought that there was so much more we could do. As an independent, neutral convening body, I realized that the NAM could ‘incubate’ the recommendations — that is, work with key stakeholders on the ground to pull in new voices who could take the recommendations forward,” says Bogard, noting that if she had not gone to Wharton, “I wouldn’t have had the time, the space, or the intellectual energy to think outside my own box.”

Six months after returning from Wharton, the NAM launched a new president-level initiative, the Innovation to Incubation Program. Inspired by Bogard’s Wharton experience, the program champions innovative ideas and cultivates pathways to action in health and healthcare. It builds on the science and recommendations coming out of the National Academies by bringing together innovators to bring these ideas to fruition.

Currently, the NAM is facilitating several projects in the incubation program on topics such as early childhood development, social justice and health equity, and the importance of timely home permanency for children in foster care.

Based on her positive experience at Wharton, Bogard recently completed a second program, Effective Execution of Organizational Strategy, as she prepares to roll out the NAM’s five-year strategic plan.

“What really stood out in this program was the importance of organizational culture — that people have a voice and are engaged in the strategy execution,” says Bogard. “I also realized that we have a strong culture — as a non-partisan, independent organization driven by science. The question then becomes, ‘How strongly engaged are your staff in your culture internally?’ ‘How do they operate under those values and expectations?’ That was a huge ah-ha moment for me.”

At an executive retreat after her time at Wharton, Bogard led the NAM’s senior leaders on a ‘pre-mortem exercise’ she learned at Wharton. “We imagined five years down the road that our strategy had absolutely failed. What would The Washington Post headlines be?’ It was such a useful exercise to walk through with my leadership team — it allowed me to highlight the things necessary to have in place — such as making sure you have buy-in-from your leadership and appropriate resources and staffing,” says Bogard.

Since the retreat, Bogard has presented the NAM’s strategy plan to both the governing body and to its 2,000 members. The strategy outlines the NAM’s vision — a healthier future for everyone — and three strategic goals that focus on identifying and addressing critical issues around health equity, diversifying the NAM’s membership, and building leadership capacity across diverse disciplines to shape the future of health and medicine.

Bogard says while having the high-level discussions with top leaders is important, getting buy-in from the 35 employees responsible for overseeing programs and leading membership and strategy activities is equally vital.

“We have three goal groups now working on a draft implementation plan to give to our council for comments. Then we will execute our strategy plan,” says Bogard, emphasizing that she is making sure staff is engaged around culture throughout the strategy rollout process.

“Wharton’s program has been instrumental in this effort. It would benefit anybody sitting at the intersection of executive leadership and taking forward their organization’s strategy — where they need to convince both their leadership team and bring along all the staff,” she concludes.