For Garrett Tracey, a big highlight of his first week at Wharton came right near the end, when his break-out group picked his company — Sims Brothers Recycling — for a case study in corporate strategy. Tracey, who’s both chief operating officer and chief commercial officer for the central Ohio-based recycling firm, said the other rising business leaders in his group were fascinated by the complexities of the market for scrap metal and other recyclables, where Tracey’s firm might be buying product from a vendor one day and competing against them the next day.

He told his classmates, “You make your money buying (commodities) and you’re buying it from the person who’s also competing with you.” The dialogue got pretty in-depth — they wanted to understand. It got me thinking about some things and I was able to take that back to my co-workers in Ohio. He said he drew up a strategy matrix, based on some of the solutions discussed at Wharton, and gave it to Sims Brothers executives to help focus on company goals. 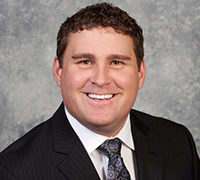 “I’m trying to develop strategies and thoughts around the businesses that will take everybody to the next level. Quite frankly, if you’re not part of that, you’ll be run over or run out of business by the people that are.”

Tracey’s experience with Wharton Executive Education and its General Management Program (GMP) — which offers a chance to learn new skills and current best practices in business strategy, finance, marketing, and leadership — shows how the program can benefit rising executives at small and mid-size firms that face one-of-a-kind business challenges.

For the 42-year-old, who hadn’t stepped in a classroom since earning his MBA degree at Northern Kentucky University more than a decade ago, Wharton’s GMP was an opportunity to broaden his business acumen at a point in his career when he expects to remain at the same firm and hopes to move into an ownership role.

“I didn’t want to look back and have 25 years with this company and be an owner, but (also) be 25 years removed from school and not in the front lines of education,” Tracey said. He added: “I think education is extremely important to continue with and keep up on — and this was sort of a perfect crossroads for my career.”

At Sims Brothers — a roughly $100 million company with 175 employees — Tracey already wears two important hats. The chief operating officer oversees the firm’s handling of scrap metal and other recyclables, while as chief commercial officer he also handles the buying and selling of commodities, a critical part of the business. In looking to Wharton for mid-career education, he said his goals are to gain a better grasp on finance and to think more strategically.

“Strategy is a big one — there’s a lot of interconnected relationships in our industry, so I wanted some specific help with understanding that and which itches to scratch and which to not,” said Tracey, who said he’s specifically hoping to gain skills around mergers and acquisitions as well as the use of private equity.

In Wharton’s GMP, Tracey will earn a certificate and Wharton alumni status after completing six one-week programs — including at least one each in the areas of leadership, finance, strategy, and marketing. He said his two additional elective courses will probably both focus on strategic areas such as M&A or negotiations. He’s hoping to finish the program next January, in just under one year.

Tracey attended his first GMP session in March with Creating and Implementing Strategy for Competitive Advantage, and was impressed not just with the class and the main instructor, Wharton management professor Nicolaj Siggelkow, but with the entire atmosphere on campus. “I think there’s a culture and mystique around Wharton itself and that was very prevalent — everything was so well thought out.” The recycling executive also said he gained much by networking with colleagues from different industry groups, many of whom he’s kept in touch with in between sessions.

In the classroom, Tracey heard compelling case studies — most memorably, the interconnectedness of Walt Disney World, and how the experience was designed to maximize revenue — but also learned a lot from visiting experts and frequent group discussions and exercises.

To end the week, Tracey and his classmates were asked to spend 15 minutes to “giving yourself three things that you’re going to go back to the office on Monday and do. And it was easy to implement some small things that were not necessarily high-level strategy but things to get people thinking the right direction.”

As he continues to gain more knowledge in the months ahead, Tracey said he hopes his new insights into finance and leadership will help him take Sims Brothers to new levels of success when he moves into the top leadership position.

“This whole industry is entrepreneurial,” he said. “I’m trying to develop strategies and thoughts around the businesses that will take everybody to the next level. Quite frankly, if you’re not part of that, you’ll be run over or run out of business by the people that are.”