On the first Saturday of the Advanced Management Program (AMP), participating executives travel to Boathouse Row on Philadelphia’s Schuylkill River. Most are unfamiliar with the 62-foot long, 22-inch wide racing shell they will soon be sitting in. With its alternating 12-foot oars and 8 sliding seats, the shell can seem intimidating. But that’s not the case for Bill McNabb, former Vanguard CEO and an accomplished oarsman.

McNabb joins the group at the boathouse, where a quick lesson on the basics of rowing takes place before the shells hit the water. But it’s in the classroom the following week where he shares the lessons gleaned during his 10 years at the helm of $5.6 trillion Vanguard.

“After the day on the river, you understand rowing as a metaphor. The lessons on leadership and high-performing teams from the day are philosophical,” McNabb says. “Back at Wharton, I relate what they learned on the water to what they can do in the office. In practical terms, what are the steps you take to build a high-performing team in a business setting?” 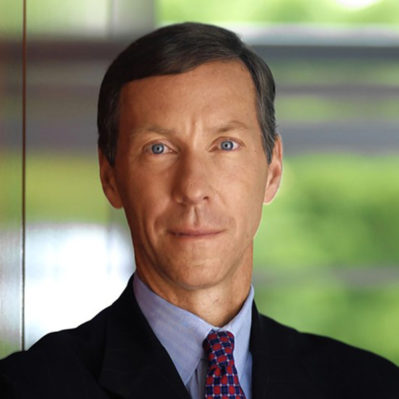 “Successful leaders must continue to challenge themselves, get out of their comfort zone, and grow. That is what AMP is designed to do.”

McNabb says one of the first considerations is selecting the right people. In terms of rowing, that means testing for physiological capacity. You can see how much power potential team members can generate on an ergometer, and use a strategy called seat racing to determine who the high performers are. Then coaches must use their judgment to determine who makes the team and — critical in rowing — where they sit in the boat.

At Vanguard, hiring starts by developing a profile of the candidate from an intellectual standpoint. “We look at academic records and do additional testing,” says McNabb. “We give candidates real-world cases and see what they can do. They’re observed by the top leaders in the company over two full days. It allows us to compare and contrast how different people handle different situations and how teams come together. Watching our people operate in these team settings helps us assess how they will perform in the future business settings.”

The second consideration for leading a high-performance team is how to keep raising the bar. McNabb says that’s especially hard to do when you’re successful. One example: for Australia’s Olympic rowing team, winning the gold medal meant that four years later at the next games, they were the team to beat. Defending their title meant they had to change their game. “They knew what they did to win the first one,” says McNabb. “But so did everyone else. To get another gold, they had to raise the bar.”

“At Vanguard we do that by setting very aggressive stretch objectives. We also rotate leaders to different parts of the organization. Getting fresh perspectives inevitably leads to raising the bar. Last, we sometimes ‘refresh’ the team with new talent,” McNabb says. “One of the things I’m most proud of during my tenure was bringing in a general counsel and a CFO from outside the company. Their different sets of skills and world experiences have been phenomenally helpful and have raised expectations.”

McNabb used one other example of “raising the bar” with the group. “We were faced with some interesting challenges coming out of financial crisis. In response, people turned to citing data. When I asked why the data showed what it did, they had no answer. As Jim Collins said, ‘Get worried when you can explain the What but not the Why.’”

“We were looking at the market share of one of our critical products. The data said market share was holding steady. But at the same time there was a lot of talk about a substitute product in the marketplace that was at least as good if not better. I asked my team, ‘Given what we are reading about this product, why is market share holding steady?’ Some replied, ‘It just is — look at the numbers.’”

McNabb’s team gave those numbers to a rising star. He came back quickly with some good news: the data were correct. But that was only the case because the product had been repackaged to expand its appeal. Market share for the core client of the original product was falling dramatically. “It was a real wake up call,” says McNabb. “Once we knew the ‘why,’ we were able to have a discussion about reinvention.”

The scenario is just one example of the kinds of practical advice McNabb shares in AMP. He says now that he is retired, he is looking for additional ways to share his experience and expertise in the program. “Vanguard is a big believer in executive education and AMP specifically. We have used the program very aggressively, sending dozens of senior leaders over the years.”

“For individual leaders,” he says, “the most important traits are having a growth mindset and grit. The two are highly interrelated. With today’s speed of change, the need to keep learning has never been greater. Successful leaders must continue to challenge themselves, get out of their comfort zone, and grow. That is what AMP is designed to do. The program gives you the opportunity to absorb multiple years of learning and personal growth in just five weeks.”