Tiffany Willis surprised friends, family, and colleagues — and even herself — when she hit “send” on a post she wrote on LinkedIn. In celebration of her new role as Starbucks’s vice president and head of investor relations, she acknowledged the journey she took to get there: “Who would have ever thought that this homeless teenage mom, who didn’t even have the ability to buy a cup of coffee, would grow up to become a #Starbucks partner? I can no longer celebrate my success without acknowledging my scars because those scars taught me skills that I still use today.”

Willis’s journey also includes an undergraduate degree in accounting; over seven years with PricewaterhouseCoopers and Ernst & Young; and a memorable career, anchored in internal audit and consulting, at Time Warner. After earning her MBA from Emory, she transitioned to Fiserv, a powerhouse in the fintech industry, to become a leader in the finance organization. She quickly rose through the ranks with expanded responsibilities, including serving as the vice president of strategy and operations within the office of the CFO. But Willis’s personal and professional pursuits continued.

“I've always had unceasing curiosity and a never-ending thirst for learning,” says Willis, “and furthering my education at some of the best institutions was always a priority. After completing Harvard’s cybersecurity and managing risk program, I found myself still looking for an additional opportunity to ‘round me out’ and prepare me for my next step. I knew Wharton could help me, as a cream-of-the-crop business school.” 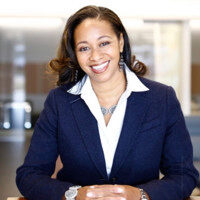 “The AMP program allowed be to become the leader I am today.”

Specifically, she had her sights set on the Advanced Management Program (AMP). With her unwavering focus, she stepped away from her Fiserv leadership role and home life to live in Philadelphia and attend the AMP program. “I self-funded it because if I’m not going to invest in myself, then who will?” she explains. “It was important to me and when something is important to me, I learn to prioritize it and make it happen with no ifs, ands, or buts about it.”

The MBA and AMP: “You Need Both”

Willis registered for the Advanced Management Program three years after completing her MBA and says the two experiences complement each other perfectly. “An MBA teaches you how to think as a well-rounded functional leader. You understand what it’s like being the head of marketing, head of sales, head of operations. But what it doesn’t fully teach is the ‘non-book knowledge’ — the inner workings and complexities of all the warm inner stuff.”

“In the AMP, multiple career coaches were formally and informally assigned to me, and they helped me define and describe my career, life peaks and valleys, and what I valued most in life. It allowed me to get tuned in to who I am authentically as a person, which then eases over to who I am as a leader. Then experiences like rowing on the Schuylkill and attending West Point push you further into your leadership evolution. As you climb up the ladder, the technical skills do not motivate and inspire your team. Instead, you have to connect with people in an authentic way to bring out the best in them for them to support you in delivering the results you've committed to the company.”

Willis also credits the “top-caliber leaders” with whom she attended AMP. “My cohort included Fortune 500 CEOs and leaders talking about their experience, what they have learned, how they got to where they are, what they would've done differently. You can’t get that wisdom from a book, nor can you feel their passion from a recorded podcast. They really helped me to be more comfortable and confident with who I am as a leader, and to learn how to lead as my full authentic self.”

A week after she returned to Fiserv from the AMP, Willis was asked by her CFO to head up investor relations. When speaking about investor relations, she says she loves it, “as it leverages some of my strengths. You need finance acumen because you're speaking the language of numbers. It’s critical to have superb soft skills, such as relationship building and relationship management, because you're talking to Wall Street constantly. Also, you must have strong communication skills because you're the storyteller, the spokesperson.” (Note: Willis represented the state of Georgia as a spokesperson when she reigned as Ms. Black Georgia USA.)

After several years at Fiserv and then Ingredion, Starbucks leadership reached out directly to Willis. She says, “When a global and iconic brand, such as Starbucks, reaches out to you — you respond.” Willis was very familiar with the company (as many of us are), but her knowledge runs deeper than most, as she has been a Starbucks shareholder for over a decade. She knew first-hand the type of company Starbucks was and wanted to be a part of their next chapter (as they just celebrated their 50th anniversary).

During her conversations, Willis says she loved the sense of community and allegiance to the company mission ("To inspire and nurture the human spirit — one person, one cup and one neighborhood at a time.") that each executive conveyed, and joining Starbucks has been nothing short of refreshing.

During her initial meeting with Kevin Johnson, CEO of Starbucks, she asked him, “One day I want to sit in your seat. What tips and advice would you share about how I could progress?” He responded with “be authentic.” Willis says that being authentic means to be whoever you are, whatever you represent both on and outside of your resume, and to comfortably bring you (all of you) to work and shine.

Willis says his advice was so powerful because “especially in corporate America, we somehow learn to come to work with a façade, with your game face or corporate face. It was something we talked about a lot in AMP, but this was really the first time that I heard someone say it in a work setting — to be transparent, be you, and that’s what's going to make you successful if you want to get to the CEO seat one day.”

As with many life lessons, Willis says she had to be ready to hear Johnson’s advice about authenticity. “If I didn't have that Wharton AMP experience, which made me feel safe and confident, I may not have asked the question. When I say AMP really allowed me to become the leader that I am today, it really did. My CEO saying be authentic was permission for me to open the gate that Wharton prepared me to walk through with confidence without stumbling. I was not only ready to walk through the gate, but I was ready to sashay.”