In 2014, Sanjay Podder couldn’t help thinking that — despite attaining success delivering software projects for firms such as Accenture, the global consulting giant — he needed to make a mid-career course correction at age 42.

“I felt that I needed to do something different for the rest of my career,” Podder said recently by phone from his office in Bangalore. He said he thought about the next two decades. “What,” he asked himself, “if there is something that I’m missing out on?”

That spring, Podder made a decision: Instead of going on a fancy vacation, he was going to invest in himself. After some shopping, he decided on the Advanced Management Program (AMP) offered by the Wharton School’s Executive Education Program, which offered him a chance to develop new skills in areas such as leadership and finance over an intensive five weeks. 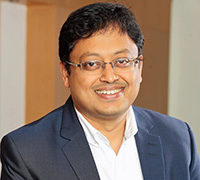 “Wharton made me realize that if you want to do something, you can do it.”

Three years later, Podder says that he’s loving his life and his career, and he credits the Wharton program for many of the good things that have happened to him. Back in India and now a managing director for Accenture Labs, he’s winning recognition as a thought leader in using advanced technology to help the nation’s poor, including his work with an innovative school-lunch program that feeds more than a million kids every day. What’s more, he has a new diverse network of friends and a healthier outlook on life, including feeling physically fit for the first time in years.

The software executive said his Wharton experience lived up to the words that first attracted him on the website — “transformative experience” — because it was “not just about finance and management but about making a journey of self-discovery…what should I be doing now that I’m not doing.” Today, Podder is excited about returning to Philadelphia in the fall of 2017 — this time for an Eisenhower Fellowship in recognition of what he’s accomplished in melding the worlds of technology and philanthropy in his native India.

When he first started looking into the Wharton Executive Education program, Podder said, his goals were ambitious but also more narrowly focused: To gain new business skills, such as financial know-how, that might help him lead a start-up or a business unit someday. He recalled some friends asking why he didn’t look at a more tech-oriented school such as MIT, but for Podder the whole idea was to break out of the technology silo. He thought the mission was important enough that — unlike many of his peers whose studies were funded by their employers — he decided to pay for the schooling himself.

When Podder arrived at the University of Pennsylvania campus in May 2014, some of the experience was in line with what he expected — including the chance to learn from some of the world’s top business professors, and also to make a few pilgrimages to museums where he learned a lot about America’s early days, including Penn’s prolific founder Benjamin Franklin. But unexpected moments helped Podder gain an appreciation for the special nature of the program, such as a presentation on leadership by an expedition team that had summited the Himalayan mountain K2.

What Podder said he had failed to anticipate was the lure of his connection with a new global cohort of like-minded strivers — his classmates — who would help him broaden his life perspectives. “The people were from all over the world, and they were all exceptional leaders in their own right,” he recalled. At night, they bonded over trying out the cuisines of their various nationalities, and working on a class project around creating technology to help poor people in remote rural villages gain better access to health care.

“In many populous countries, the doctor-to-patient ratio is quite low, and so it’s difficult for people to get access to medical service,” Podder said. In attacking the problem, Podder — not surprisingly — became the group’s tech expert, but he also got to work with a strategy expert from a large conglomerate, a banker, and a radio executive, forming an experience that he said broadened his horizons on both business and philanthropy.

As Podder wrapped up his work in the AMP program, he was asked to describe how he saw himself in 10-15 years. He said that while he envisioned running a large and innovative IT services firm, and deep engagement with his family, he also stressed that he pictured himself “giving back to society.” And it turned out that one of his AMP classmates, Shridhar Venkat, was perfectly positioned to work with him on a philanthropic venture when he returned to Bangalore.

Venkat is the CEO of AkshayaPatra, which serves 1.6 million hot school lunches to kids across India, the largest non-governmental organization of its kind in the world. When Podder joined Accenture Labs, he launched a project called Technology for Good that looks to apply state-of-the-art tech solutions to charitable ventures.

“Sanjay and I used to go walks during the AMP program,” Venkat said in an email interview. “When I used to tell him about my organization he developed interest in supporting us . He had that philanthropic streak in him. That got kindled.” He described Podder as “kind hearted,” a “very intelligent guy” who “feels for [the] needy.”

Although his friend Venkat’s venture was already widely acclaimed for its work, Prodder and his colleagues set out to find ways to make it run more efficiently. For example, his team helped AkshayaPatra develop beacons to alert schools when the food is arriving, so meals are served fresh, and still hot. Podder’s team also worked on heat sensors for the giant cooking cauldrons, to help make food preparation more efficient.

Podder said his Technology for Good project is engaging with numerous other social innovators on projects such as harnessing advances in artificial intelligence to help India’s blind population, as well as solutions to mobility, language, and literacy barriers for the nation’s millions of poor people. He said he finds this kind of work isn’t just good for society but helps Accenture Labs develop technology with commercial applications, “so it’s a win-win situation.” Now, he says, he hopes that his upcoming Eisenhower Fellowship — which coincidentally is also in Philadelphia, although not connected to Penn — will connect him with social entrepreneurs working in Africa and other poverty-stricken parts of the world. He will join 20 other leaders in business and government from 11 nations in Asia and the Middle East to exchange ideas about how innovation and social entrepreneurship can bring benefits to their home countries.

Meanwhile, Podder has developed a WhatsApp social networking site for his 2014 AMP classmates who remain in constant communication, celebrating their promotions and offering career advice and encouragement.  He bonded with some of his AMP friends at a reunion in Kazakhstan — a place he might never have visited if not for his newfound Wharton connections. He even gives some credit to his Wharton experience for helping him lose weight and work out more often, after he noticed that some of his classmates were in better shape than him.

“I think Wharton made me more confident,” Podder said. “I realized that if you want to do something, you can do it.”