Home › Wharton@Work › Back to School with the General Management Program

Back to School with the General Management Program

“After I took that first Wharton Executive Education class, I thought, ‘I’ve got to come back,’” says Phil Kim.

The program that got him hooked was Strategy and Management for Competitive Advantage, taught by Wharton Management professor Nicolaj Siggelkow. Kim, the chief strategy and creative officer at Universal Nutrition — a New Jersey-based manufacturer of branded sports nutrition products distributed around the world — says he realized how much he had missed the experience of being in a classroom, listening to a top expert in a field, and “being able to really think through ideas with your peers.”

Yet back when Kim was a student at the University of Pennsylvania, his mind wasn’t on business but liberal arts. He earned a degree in literature and political science, and went on to the University of Michigan to pursue literature as a PhD candidate. However, he ultimately chose to enter the business world, accepting an entry-level marketing position at Universal Nutrition. Today he helps guide the direction of the company and shape its vision through strategic and creative planning and implementation. 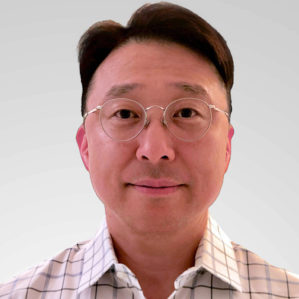 “Since I started with my company more than 23 years ago, I’ve learned everything I know through hands-on experience, on-the-job training, and dozens of books.… [But] enrolling in the GMP made me realize that I could learn so much in a structured environment, and from others — from my peers as well as professors.”

Still, Kim had never received any formal business training other than a few economics courses. “Since I started with my company over 23 years ago, I’ve learned everything I know through hands-on experience, on-the-job training, and reading dozens of books on my own,” he says. After taking that first class, Kim discovered Wharton’s General Management Program (GMP), which seemed like the perfect way to continue his learning. He eventually applied and was accepted.

“Enrolling in the GMP  made me realize that I could learn so much in a structured environment, and from others — from my peers as well as professors. Having been a PhD student earlier in my life, I remembered the importance of learning through collaboration and in a directed way.”

Kim notes that the GMP ’s executive coaching component really helped improve his leadership capabilities. Among other things, it inspired him to start practicing meditation, which has expanded his thinking and changed the way he approaches problems, including teambuilding and leadership. The coaching was especially effective in combination with another of his programs, Becoming a Leader of Leaders: Pathways to Success. “Without a doubt, [both] helped me better understand and develop my leadership skills. I’ve often thought of business as being about winning the war and seeing the biggest picture possible. But now I realize how important the smaller, individual battles are. The work you do as a leader builds upon itself.”

His use of battlefield imagery was partly inspired by a trip to Gettysburg, which is included in the curriculum of Becoming a Leader of Leaders. Kim describes that trip as “a tremendous experience.… Kudos to [Professors] Mike Useem and Greg Shea for making it so memorable.”

Reflecting on his GMP  experiences so far, the former literature major says he’s gained a solid understanding of the larger theories guiding business today, as well as a springboard for pursuing other areas that interest him. Moreover, he observes that the program struck the perfect balance between theoretical and practical: “Each program is designed to help you apply the specific ideas you’ve just learned to the challenges you face at work.”

Kim is looking forward to his final GMP  program, Mastering Innovation: From Idea to Value Creation in January 2020. “I’ve spoken to a lot of individuals who have taken it and say it’s a fantastic class,” he says. “It’s taking the idea of innovation and making it more hands-on, creative, and cooperative. And apparently,” he adds, “it’s a lot of fun.”